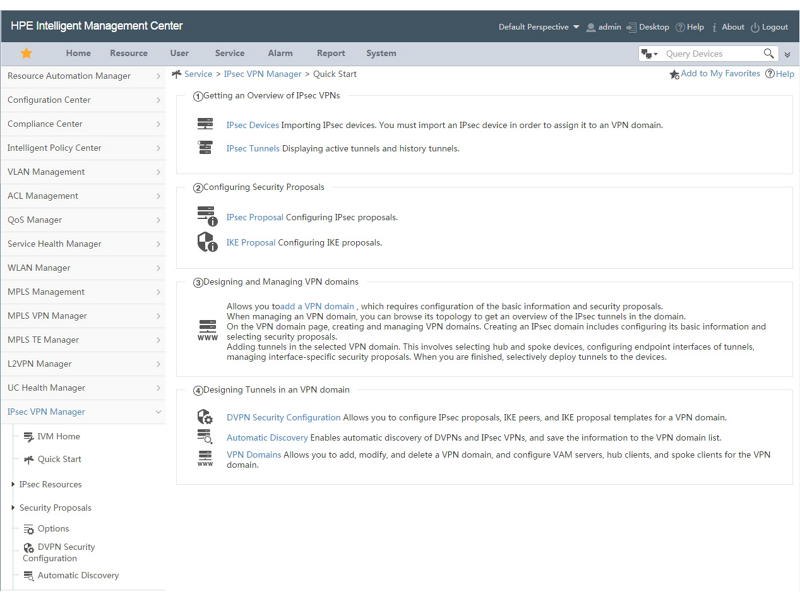 HPE IMC IPSec/VPN Manager (IVM) Software manages IPSec VPN set-up and traffic. It delivers a total VPN solution, which allows you to construct an IPSec VPN network and effectively monitor the operation and performance of it with a graphical VPN topology in real time to troubleshoot VPN issues quickly.

IMC IVM Software expedites IPSec VPN deployments with easy to use wizards to drive consistency among large scale deployments. It is also critical to deploying Dynamic VPNs by pushing VPN configurations in a consistent manner to reduce errors and accelerate deployment.

IMC IVM Software accelerates dynamic VPN (DVPN) setup by allowing you to deploy DVPN configuration rules to multiple routers simultaneously. You can also auto-discover an existing DVPN configuration in routers and create a DVPN domain based on the discovery result.

HPE IMC IPSec/VPN Manager (IVM) Software provides comprehensive audit capabilities so that you can determine consistency with router configurations and what is set in IVM. You can also audit the DVPN tunnels to determine whether a specific DVPN tunnel is connected.

You can determine the performance of the VPN with IMC IVM Software through the available historic and real-time status monitoring and alerting. You can quickly identify equipment faults or areas where data packet loss occurs.

IMC IVM Software allows you to view your VPN deployments, which are automatically discovered, with a topology view. Administrators can view the VPN deployment, see performance metrics of the device or tunnels, and quickly access configurations from the topology.